Together with the Dutch Embassy the Dutch Business Network organised a Round Table about Climate and Renewable Energy on November 9. During a lunch at the residence of Ardi Stoios-Braken, Deputy Chief of Mission and with the presence of Robin van Boxtel, First Secretary Climate Affairs, Energy & Water Management the attendees exchanged ideas on Climate Affairs and Renewables.

The DBN members varied a bit, from carbon depending multinationals, that are expanding their interest into Renewable Energy, to smaller start-ups that establish wind farms or biomass plantations. An interesting discussion followed where the subject of renewable energy in Indonesia was seen from different angles. 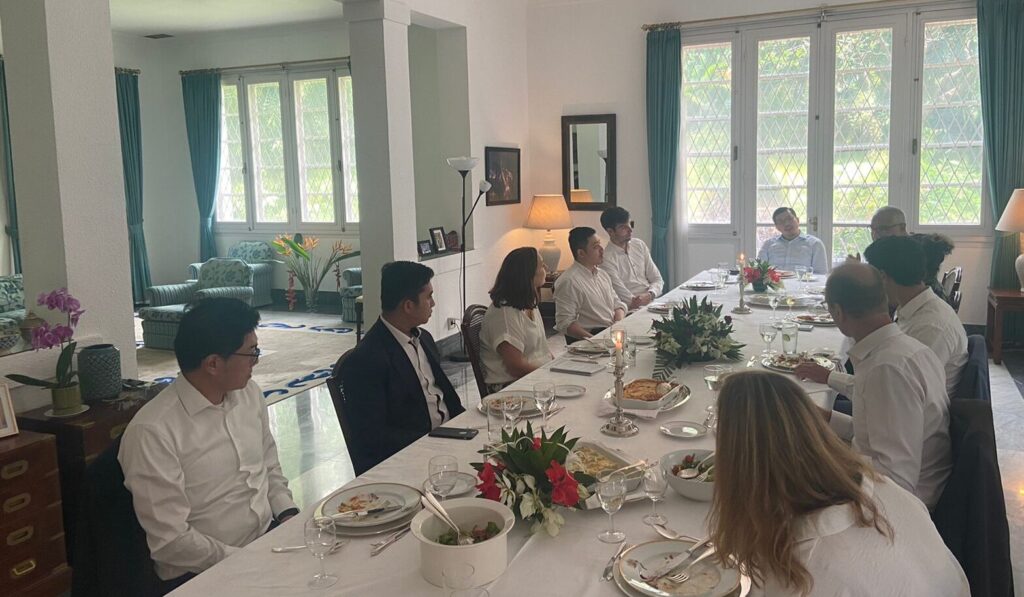 On October 28 DBN organized its first DBN Breakfast Meeting in almost two years. It was great to see familiar and new faces at the Erasmus Huis of the Dutch Embassy.

During this DBN Breakfast Meeting we had Henry Hendrix and Kim Hendrix, a married couple, presenting to us. Both Henry and Kim are working in the poultry industry but representing different companies here in Indonesia with Henry working for Hendrix Genetics and Kim for Hato Agricultural Lighting. Kim and Henry gave us a remarkable impression of how far the technology and know-how of their companies has reached poultry farms today, improving the efficiency and quality of this agricultural sector. 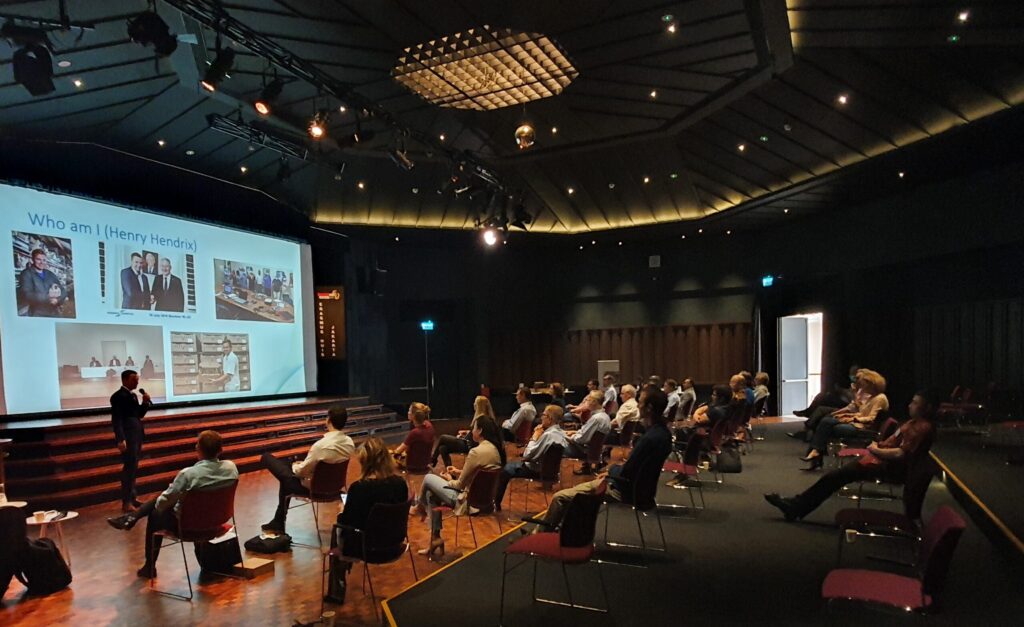 On October 7, DBN organized its first New Members Breakfast at KOI Mega Kuningan. This event is the substitute of our Virtual New Members Coffee which we started to organize for new members during the pandemic.

Since the start of the year, we had over 20 new members joining DBN of which 10 joined the breakfast. During the event both our new members and the DBN board had the opportunity to themselves. 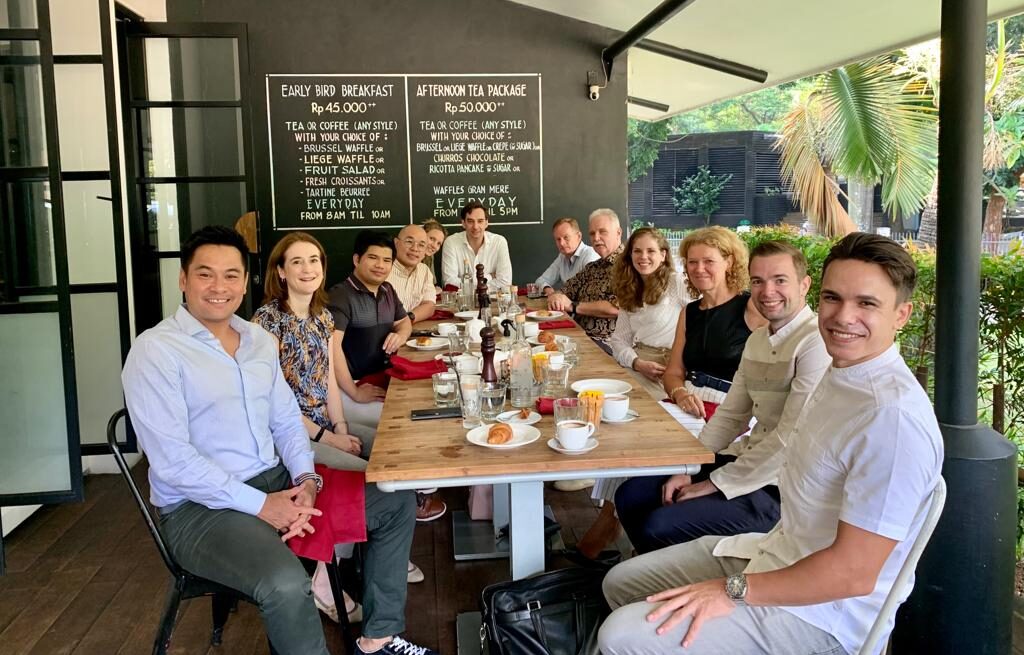 On Thursday September 30 we organized our second Members Night Out of the year. In total about 50 members were welcomed at 4 different hosts in Jakarta.

A successful second edition of this networking event!

We would like to thank our hosts for their hospitality and our members for joining! 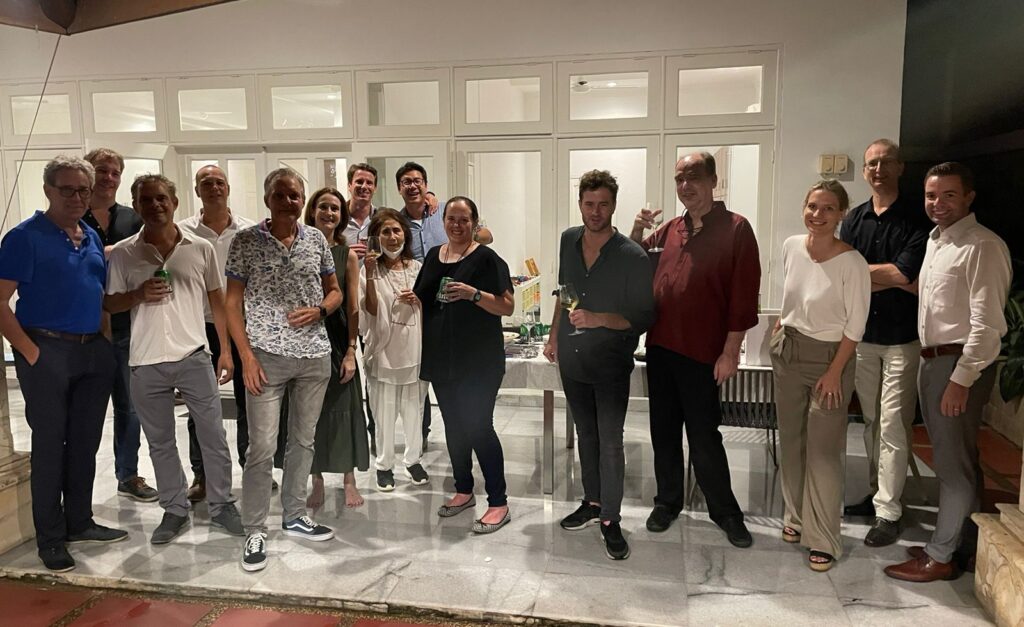 On Friday June 18, DBN organized its second DBN Sponsor-Only Event. By organizing a unique sponsor event the DBN board shows its gratitude to the sponsors while at the same time facilitating both sponsors & board members to meet, greet & catch-up.

This year the sponsors were given the unique opportunity to visit a Garuda Maintenance Facilities (GMF) hangar at Soekarno Hatta International Airport where a Cargo KLM 747 was under maintenance for a few weeks.

Unique because there are only a few KLM 747’s left and because one could meet The Queen of the Sky up close while being hosted by DBN member Chris Artmanni, working for KLM & GMF, who shared his knowledge on the airline industry.

The day ended with a round golf, drinks & hamburgers.

The event had covid-measures in place and before entering the GMF premises all had to show a negative Covid-test. 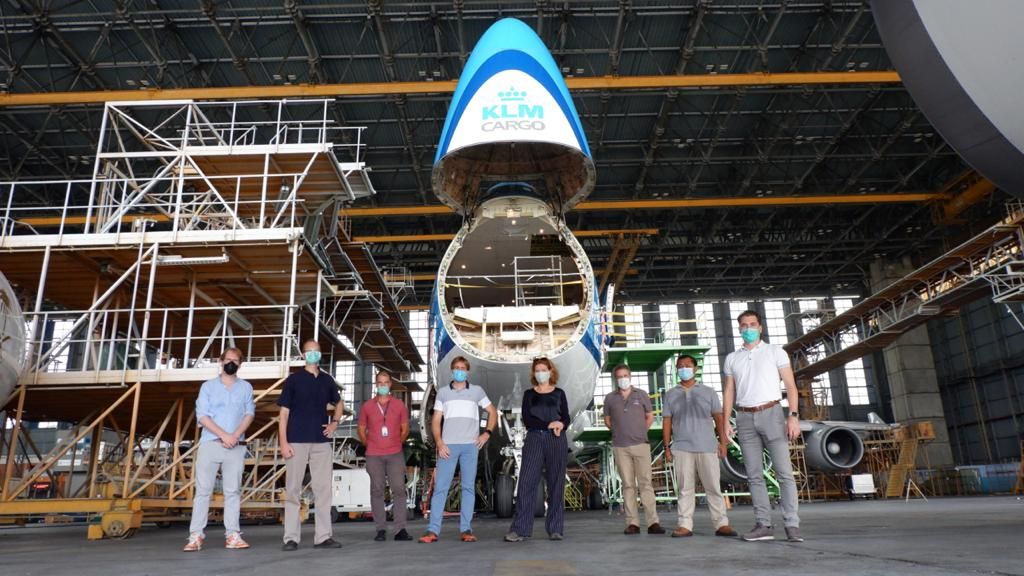 On Thursday June 3rd we had our first face to face event since COVID-19 hit Indonesia in March 2020.

Seven DBN members were host to DBN’s most popular event, the DBN Haring Party. Each host welcomed a small group of DBN members.

Freshly flown in haring was distributed to all hosts as was Bintang & Heineken beer and wine. Hosts prepared for softdrinks, extra snacks and dinner.

Thanks to all the hosts & members for joining.

The Haring Party COVID-safe style was a huge success as the photos show. 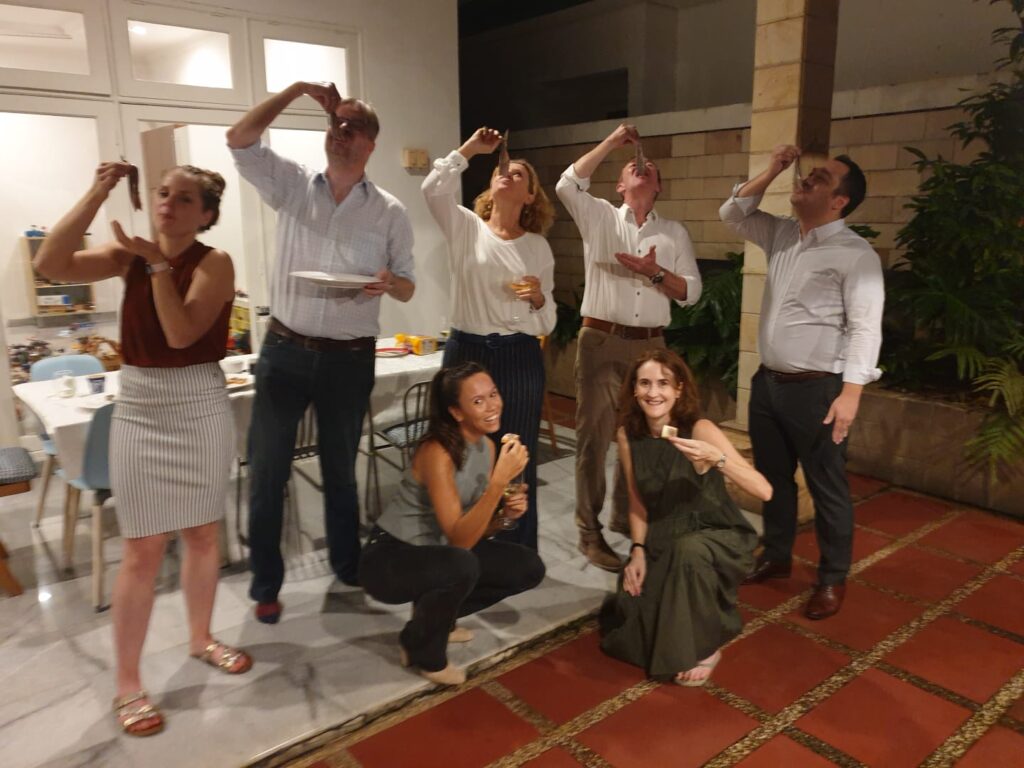 On the 3rd of May, 2021, ADCN hosted a webinar, organized by Loyens & Loeff about e-commerce with and to the European Union.

During this webinar the international tax and trade experts of Loyens & Loeff in conjunction with industry experts discussed the following:
• Framework of the new EU VAT rules.
• What actions need to be taken by Asia based web shops, online platforms, logistic service providers and market places.
• What to expect from the reporting requirements under DAC7.

The webinar closed off with a panel discussion where industry experts from leading logistic service providers and regional online platforms shared their practical experience. 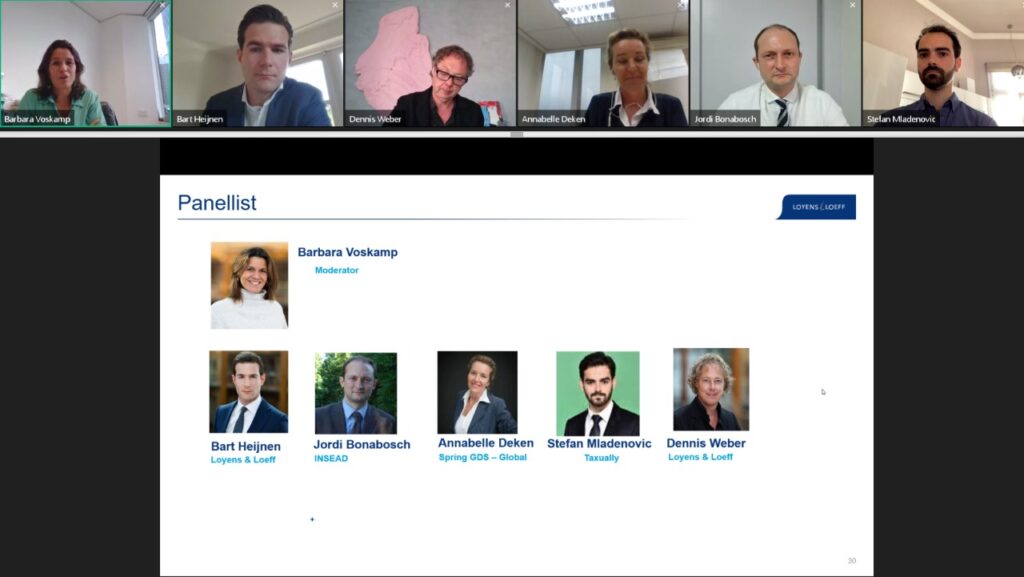 Riri kicked off and spoke on the traditions of Ramadan and the impact those traditions have on consumption. After which Wouter focused on the huge impact this consumption has on retail by sharing with us his Super Indo experience.  Steven, our third speaker, focused on production of food and in particular on ABC’s syrup and on ABC’s Ramadan commercials. We ended the 1 hour session with a short Q&A session. 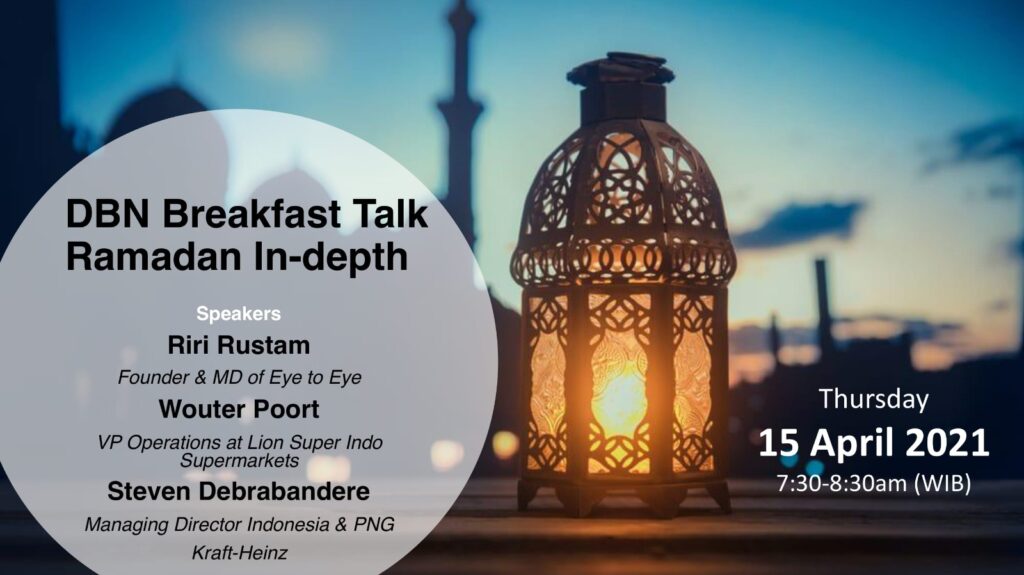 There were discussions how the implementation of the vaccination program will take place in Indonesia ( > 250 million people) and if there will be a role for the private sector. Also the different vaccine options where highlighted and the foreseen distribution and availability. A hot topic that raised many questions, but where all answers were not known yet, since there is so much in progress. 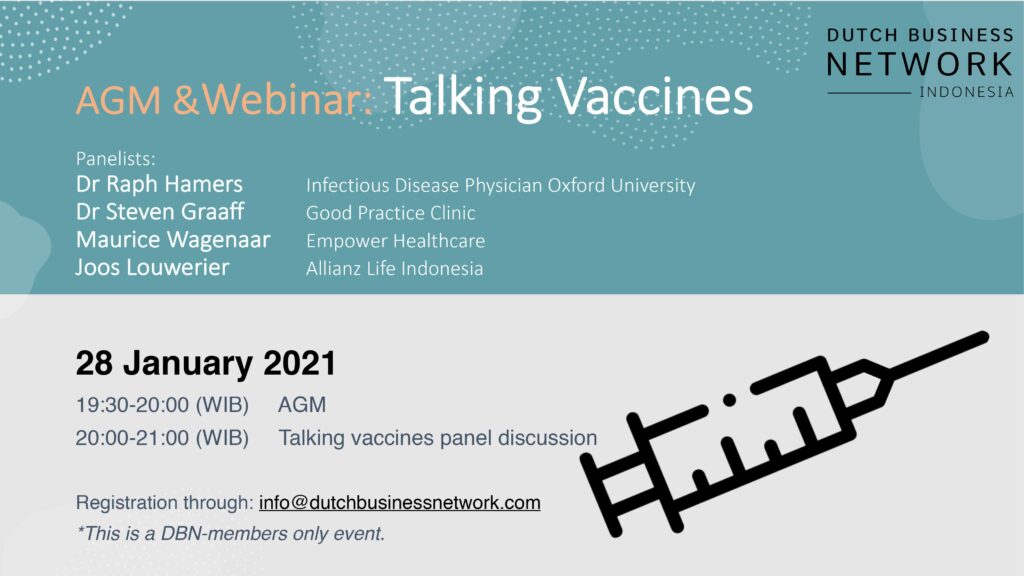 With a smaller group of SME’s, entrepreneurs and others with interest in agriculture/forestry we had an online round table session. It was interesting to hear how diverse the agricultural interests between the Netherlands and Indonesia are. The Dutch export of agricultural materials to Indonesia is substantial, and there are also quite some successful Dutch agricultural companies active in Indonesia. Indonesian farmers can benefit from the available agricultural knowledge how to increase productivity AND sustainability in the Netherlands.

During the session Joost van Uum, the new Agriculture Council for Indonesia, Malaysia and Singapore, highlighted the focus where the Dutch government might be able to help agricultural companies in Indonesia. Also during the discussions several members brought forward ideas how they might be able to work together on sustainable forest products.
A successful session that will certainly be followed up! 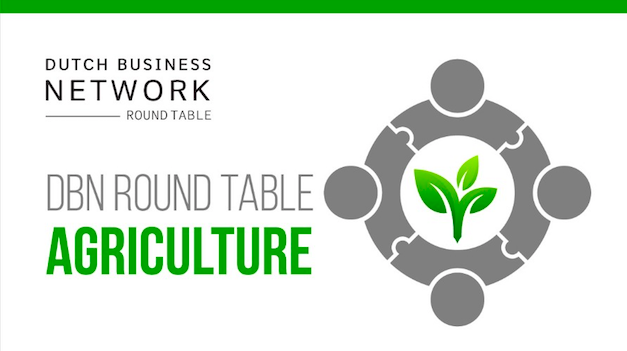