On October 13, we organized DBN’s first virtual coffee corner to meet & greet DBN’s new members now that we still cannot organize face to face events. In August and September, in total 8 new members joined DBN. Most of these new members have already been in Indonesia for several years and now felt the need, more than ever, to connect with DBN and its network. In DBN’s virtual coffee corner, both the new members and the DBN board members introduced themselves. The board also answered questions and gave an intro on DBN. It was nice to shortly see and speak to our new members and welcome them to DBN. 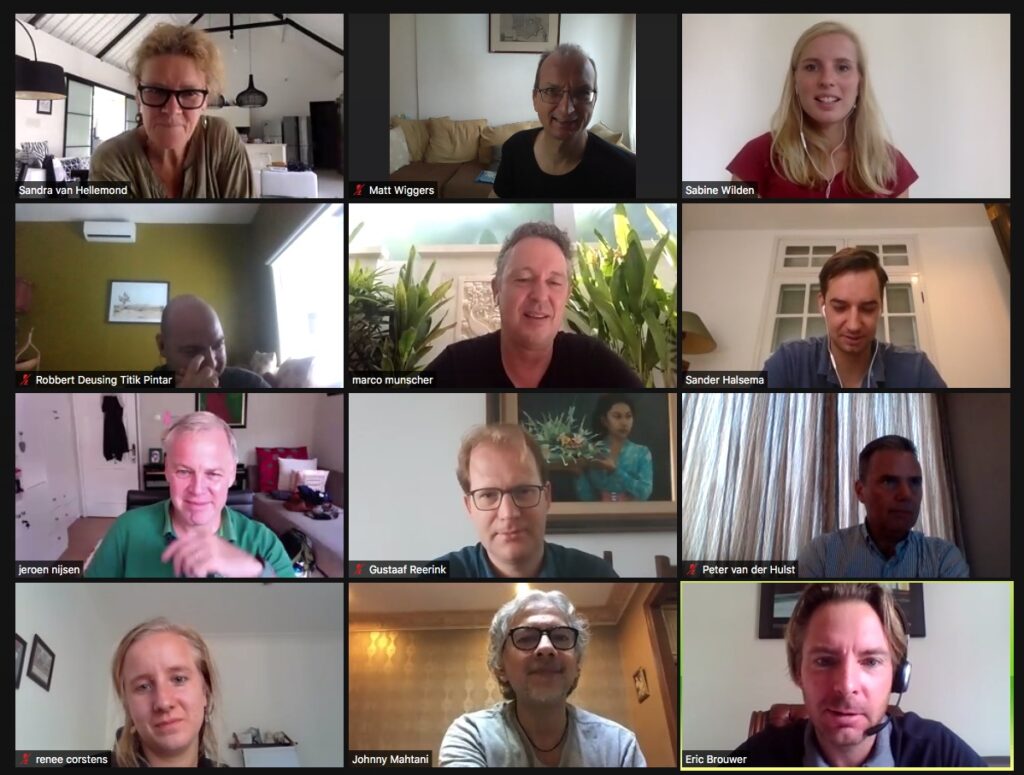 On October 8, DBN hosted the second edition of ‘DBN Draait Door’. A live stream talk show inspired by a TV-show in the Netherlands, hosted by DBN co-founder Erik ten Have.

This time, the spotlight was on 3 inspiring companies that have been offering good services despite COVID-19:

Many thanks to our three inspiring guests for their insights and stories, and our moderator for a successful second edition of DBN Draait Door. 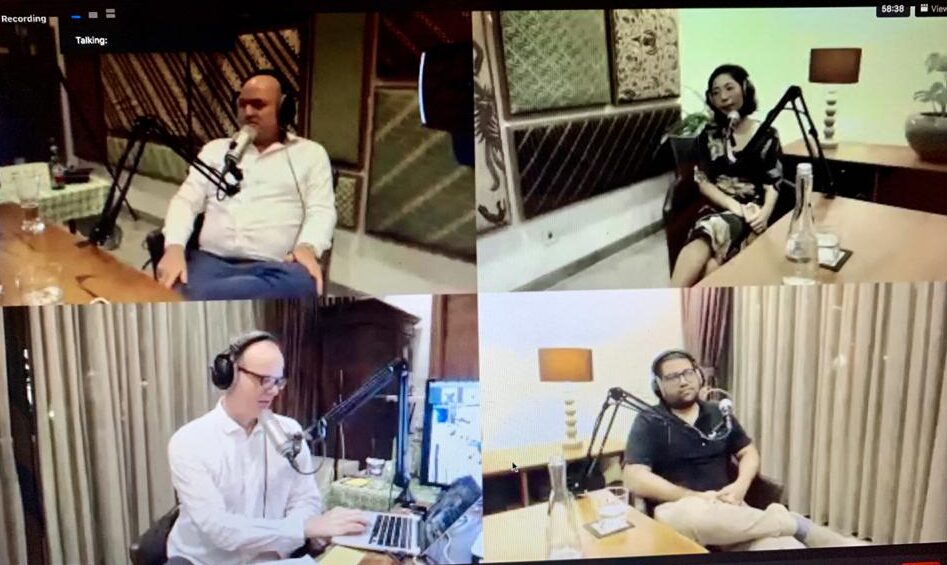 On Wednesday September 23, DBN hosted a webinar on Predictive Simulation and Digital Twin, in which Bart Brink, Global Director Digital Twin at Royal Haskoning DHV was our guest speaker. This sharing session focused on how leading companies are using this core technology of the Industry 4.0 revolution to gain new foresight that has previously not been available to decision-makers.

This webinar delved into what Predictive Simulation is and how it can be used to create highly visual and accurate digital twin models of dynamic, real-life assets, systems and processes to drive operational and investment decisions. Bart Brink shared his vision and use cases on Digital Twins in industry and how they will change the way we plan and work. 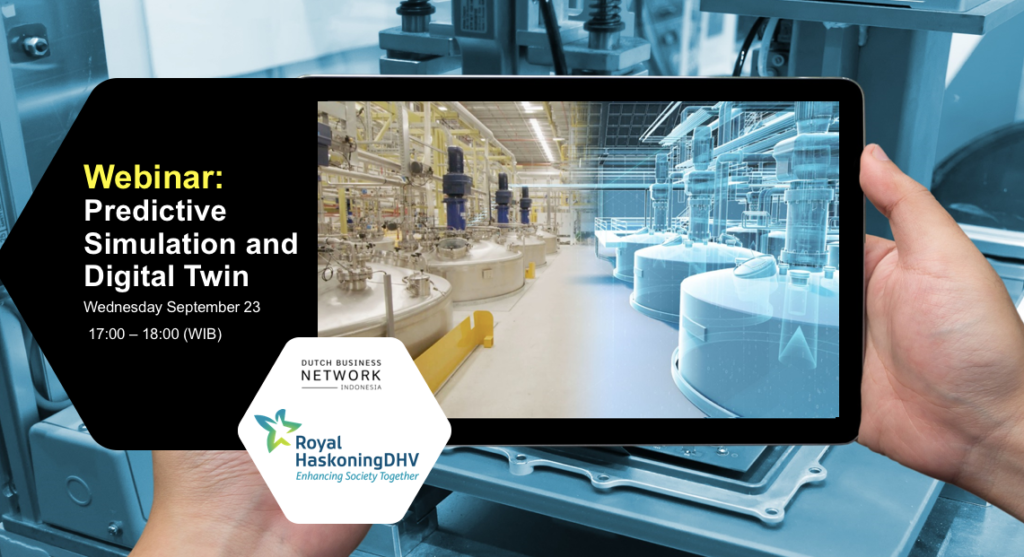 On the 28th of July, DBN hosted a webinar about expanding business during COVID-19, in which Kay de Vreese, Managing Director at De Heus Indonesia, one of DBN’s sponsors, was our guest speaker. In this webinar, Kay spoke about the recent acquisitions of De Heus in Indonesia including the key take outs and learnings.

We would like to thank Kay de Vreese for his time and insightful presentation. 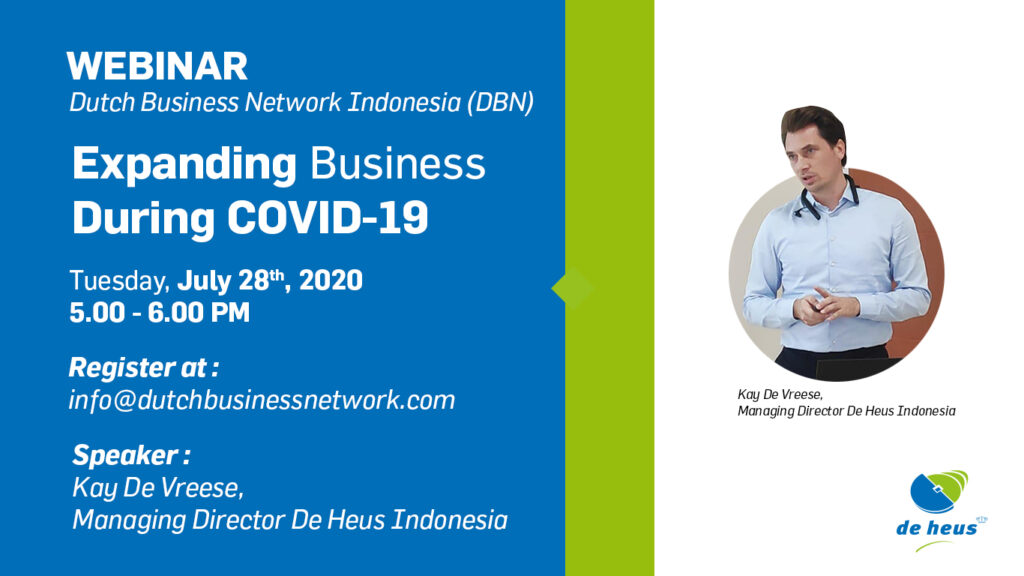 On the 29th of June, DBN hosted, for the first time, a regional webinar in cooperation with the ASEAN-Dutch Chamber Network. The six chambers within ADCN take turns to host ADCN-webinars and these webinars are open to view for all ADCN chamber members.

Our guest speakers were Roland Coppens from Air France-KLM and Menno Stokman and Jasper Heslinga from the Centre of Expertise Leisure Tourism & Hospitality (CELTH). CELTH started the webinar by giving insightful information on the implications of COVID-19 on travel now and in the future. After zooming in on four explorative scenarios published by CELTH, Roland took over and he illustrated how Air France-KLM deals with the COVID-19 situation in the SEA & Oceania region.

We would like to thank Roland, Menno and Jasper for their time and insightful presentation and Erik ten Have for moderating this digital ASEAN gathering. 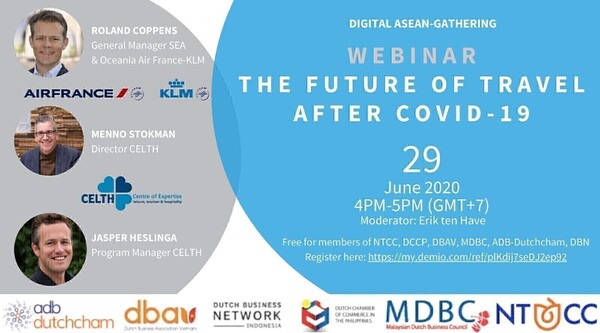 04/06/2020 Webinar | with the Dutch Embassy
On June 4th DBN hosted a DBN-Member-only-Webinar with the Dutch Embassy Jakarta as guest. Ms Ardi Stoios – Braken, Deputy Ambassador, Mr Joost Nuijten Deputy Economic Team and Mr Franklin Nesvadba, Head of the Consulair Team were present in the one hour webinar on behalf of the Embassy.

Ms Ardi Stoios – Braken, opened the webinar after which Gustaaf opened the floor to questions as the webinar was mainly a Q&A session. We had anticipated many questions related to the current economical situation but the majority of the questions were related to Immigration. Both by DBN members on the ground and DBN members currently out of Indonesia, who shared their concerns on how to obtain a new stay and/or work permit while not in Indonesia. Most questions could be answered on the spot by Mr Franklin and those that needed a bit more looking into were answered at a later moment offline.

A webinar without a flyer and without any photo’s yet a webinar that clearly served a purpose and one that was highly appreciated by DBN members.

On Tuesday April 7, DBN hosted its first webinar with the topic: COVID-19 and my business, in which Mike Broomell, CEO of Colliers Indonesia, shared his experiences on previous crises and what lessons he learned from these crises that will help to handle the current crisis. After that, there was a panel discussion with three experts:

After the panel discussion, there was room for some questions from participants.

The second week of March was marked by the highly anticipated Dutch Economic Mission to Indonesia led by King Willem-Alexander of The Netherlands.

Day 1 of the Dutch Trade Mission, DBN, together with the Economic Department of the Dutch Embassy in Jakarta, Co-hosted a lunch for Mr Peter Potman, Deputy Director-General Foreign Trade at the Ministry for Foreign Affairs. Over lunch, Corine Tap, Joos Louwerier, Charles Vincent, Sander Kokke, Jochanan Senf, Jaap Zwaan, Joost Nuijten and DBN Chair Sandra van Hellemond, updated Mr Potman on the economic situation in Indonesia and shared with him the art of doing business in Indonesia. 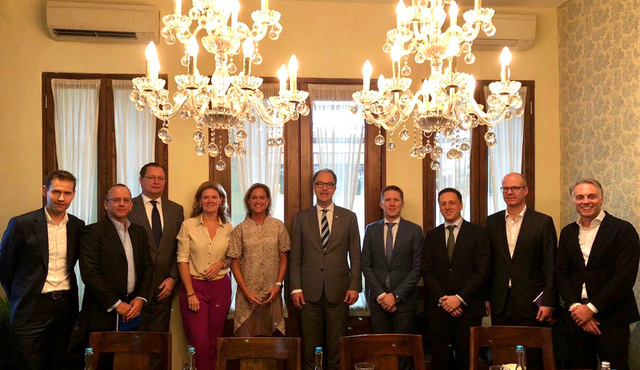 Day 2 of the Dutch Trade Mission was a special day for DBN as we signed a MoU between the Dutch Business Network Indonesia (represented by DBN Chair Sandra van Hellemond) and NLinBusiness (represented by Edo Offerhaus) on future cooperation to support Dutch Businesses looking to trade with and/or set up in Indonesia. Hans de Boer (Chairman VNO/NCW), whom prior to the signing was updated by DBN Vice-Chair Gustaaf Reerink on the current situation of doing business in Indonesia, witnessed the signing. 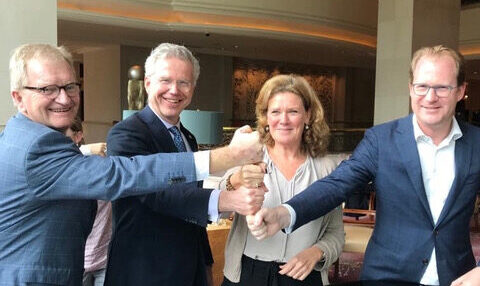 In the evening DBN Treasurer Matthijs Wiggers had the honor to be on stage celebrating the newly signed MoU in the official presence of Dutch Minister for Foreign Affairs Sigrid Kaag, Hans de Boer (Chairman VNO/NCW) and the Indonesian Minister of Trade Agus Suparmanto. 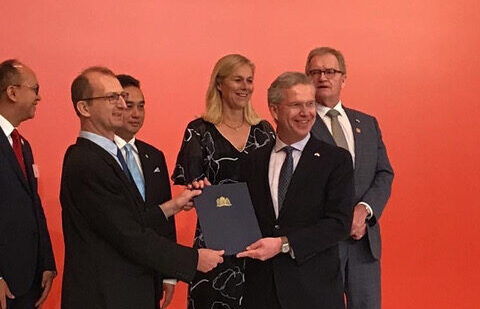 During the Trade Lunch on the second day (10 March) of the Dutch Trade Mission, DBN together with Nuffic Neso Indonesia and NLinBusiness, invited 22 Jakarta based service suppliers to connect with delegates of the Mission in the Shangri-La Hotel. The service providers were able to answer questions on different services – e.g. Legal, Tax, Finance, HR & Business development – that new investors in Indonesia may need.  Nanya Burki, Board member DBN and Head of Business Development & Partnerships Nuffic Neso: “By bringing Holland Alumni into the trade relationship we showed our contribution to human capital development in Indonesia.” 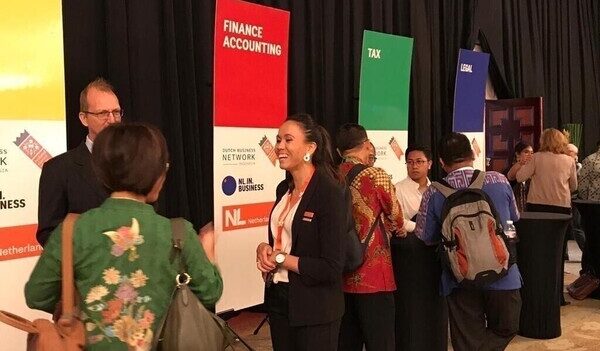 It was an inspiring evening, with thanks to our talk-show guests and talk-show host and the 40+ viewers. 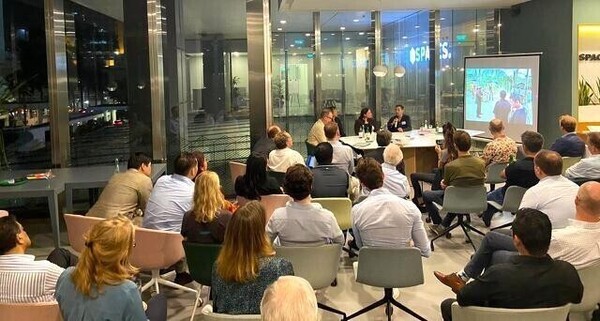 Arthur Neeteson, leads SYSTEMIQ’s national-level plastic work in Indonesia. He has set up the National Plastic Action Partnership in Indonesia, an initiative of World Economic Forum for which his team has developed a comprehensive overview of Indonesia’s plastic situation (report to be launched in March) and set up a CEO- / DG-level public-private cooperation platform.

Indonesia is one of the countries that ‘leaks’ most plastic waste into the world’s oceans – a function of its long coastline, high population and the fact that 61% of waste goes uncollected. At the same time, Indonesia is seen as one of the countries where change is happening. The President targets a 70% reduction in ocean plastic leakage by 2025 and dozens of private and non-profit initiatives have sprung up across the archipelago. During this breakfast, Arthur shared unreleased data about the plastic situation in Indonesia today. Drawing on fieldwork that has brought household waste collection to >40,000 people in the last 18 months, and on national policy discussions, Arthur offered suggestions for how to achieve a 70% ocean plastics reduction in 2025, and for how to eliminate plastic pollution within a generation.

We would like to thank Arthur for his insightful presentation. 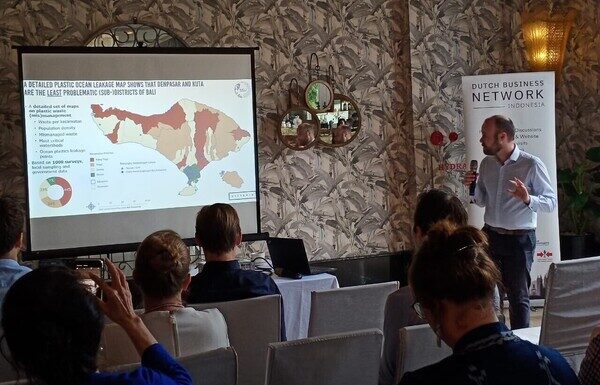 When DBN was founded, in March 2018, we decided to have short & transparent AGM’s. That’s why the two AGM’s we had so far have only been 30 minutes and all financials fit a few slides.

Gustaaf Reerink (Chairman 2019) wished all a successful 2020 and gave a short recap on 2019, Matthijs Wiggers (Treasurer) presented DBN’s financials, Corine Tap (Chairman of the European Business Chamber) gave a short presentation on EuroCham after which Gustaaf handed over the chair to Sandra van Hellemond. Sandra (Chair DBN for 2020) her first act was a very crucial one: opening the dinner buffet. The evening was a DBN members-only evening. 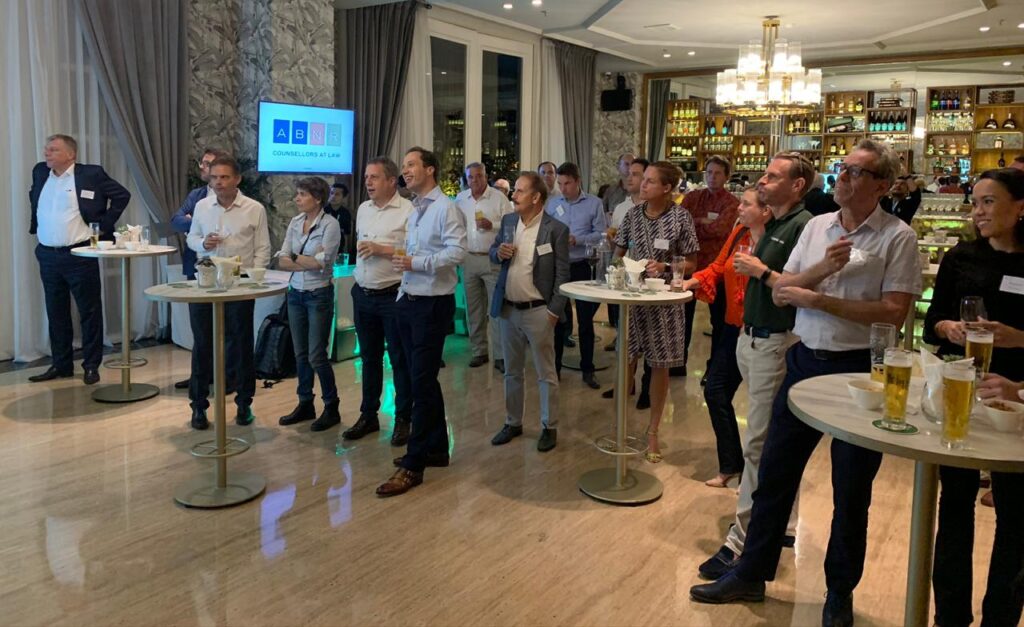